In One in the Hand, the first book of Giselle Renarde’s Wedding Heat series, the bride’s aunt Cora and uncle Dan are en route to Maggie and Ed’s weekend-long wedding retreat at a luxury resort. When Cora tries to get handsy with her hubby in the car and Dan rejects her advances, will it ruin the weekend for Cora? Or does Dan have a naughty surprise up his sleeve?

Just a quickie update to let you all know Wedding Heat: One in the Hand is now available at Amazon and Barnes & Noble. Links are below. Thanks for visiting the Wedding Heat website! 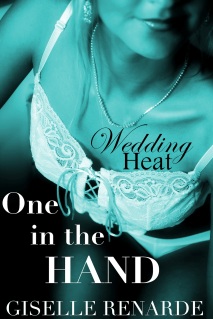 As of today my new series, Wedding Heat, is officially launched!
In my FAQ post about the series, I touched on what inspired me to write it.  Basically, I couldn’t find anything good on TV and I thought, “Hmm… maybe there are OTHER people out there who can’t find anything good on TV either… so maybe I’ll write a series of short stories to fill the gap.”
So that’s what I did.
Wedding Heat is about more than just two people getting hitched.  My tagline for the series is: Forget the happy couple–it’s the guests that make
this wedding sizzle!  The series centres around the wedding weekend for Maggie and Ed (at a luxury woodland retreat, no less!), but each story focuses on different guests. It was important to me to establish the series in that way, because I wanted Wedding Heat to be pansexual and incorporate a characters with varied gender identities as well as sexualities.
That said, the first story in the series (One in the Hand) is the epitome of vanilla.  Well, sort of.  Okay… maybe I have kind of a kinky take on vanilla–you tell me.  Its focus is on Cora and Dan, who are the bride’s aunt and uncle.  I’m tempted to call them an “older couple” except that… well, “older” is relative, right?  Here’s the handy dandy blurb:

Forget the happy couple–it’s the guests that make this wedding sizzle!

In One in the Hand, the first book of Giselle Renarde’s Wedding Heat series, the bride’s aunt Cora and uncle Dan are en route to Maggie and Ed’s weekend-long wedding retreat at a luxury resort.  When Cora tries to get handsy with her hubby in the car and Dan rejects her advances, will it ruin the weekend for Cora?  Or does Dan have a naughty surprise up his sleeve?

WARNINGS: This title contains graphic language and explicit sex–inside, outside, and on the hood of a car.

In this story, we also meet Cora and Dan’s twenty-somethings kids, who pop up in stories of their own.  Later in the series, son Joey might just have his first sexual encounter while skinny dipping with some dudes, and Vanessa might just act on her crush on her cousin, the bride.
Want to read an excerpt?
EXCERPT:

He was so handsome.

Cora caught herself thinking so more and more these days.  Men were lucky that way—they only got better with age.  Dan was stronger now than he’d been when they got married, and the grey sneaking in around his temples made him look inarguably distinguished.  She wished he wouldn’t dye his hair.  It would look better if the silver took over completely, but Dan had his pride.  Everybody did.

When Cora’s fingers met the bare skin of his knee, he jumped and flicked her hand away.  Cora was just about to feel hurt when he chuckled and said, “Sorry, I thought you were a spider.”

Cora smiled and moved in closer.  “You know, you shouldn’t have teased Vanessa like that.”

“Like what?”  Dan gasped when Cora petted his thigh, searching for something.

“About Maggie,” Cora said.  “Maggie was the first person in the world Vanessa came out to.  They were only young then, maybe fifteen or so, but Maggie wasn’t very nice about it.  That’s what caused the rift between them.  It set Ness back terribly.  She didn’t tell anyone else she was a lesbian for two years after that.”

“I didn’t know.”  Dan glanced down every so often, following the path of Cora’s insistent hand across the crotch of his khaki shorts.  “Ness never told me.”

“There are some things a girl only shares with her mother,” Cora consoled.

“Still,” he said, obviously hurt.  “I thought Vanessa and I were close.”

Cora smiled.  “You’re a good man, Charlie Brown.”  She found the button on his shorts and forced it through the hole.

“What are you doing?” Dan hissed, pulling away, though he really had nowhere to go.  “The kids are right there in the back seat!”

With a shrug, Cora pulled down the zipper on his fly.  “The kids are fast asleep and, anyway, they’re both in their twenties—they’re not kids anymore.”

Dan focused on the road.  There were no cars around at this stage, but he seemed to pretend he didn’t notice Cora pressing her hand inside his shorts, finding his cock hard in anticipation.

“What are you doing?” he asked again, stammering this time, his voice a raspy whisper.

“Nothing,” Cora chimed back at him, coyly rubbing his erection overtop of his black jockey-boxers.  He even wore sexier underwear than she did, these days.  And, god, was he ever stiff, his cock hot and throbbing against his undies.  She had to feel it against her skin.

“Stop!” Dan chastised as she fished inside the slit in his underwear, pulling out his hard-on.  “What if they wake up?”

Cora glanced back quickly, but it was hard to look away from Dan’s big dick.  “We’ll cross that bridge when we come to it.  For now, just shut up and let me get you off.”

The stage is set.  Wedding Heat: One in the Hand is now available from lots of retailers (coming very soon to Amazon and B&N): 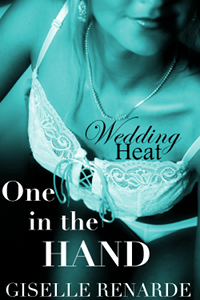 The Countdown is ON!

Wedding Heat: Wife Watching ReleaseJune 21st, 2013
Suki is back in the 12th installment of Wedding Heat! In Wife Watching, her husband Simon watches while she seduces a handsome stranger.