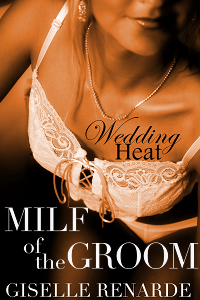 Ed’s mother Ellora is gorgeous but maligned by her family.  Russ is her son’s business partner, a ruggedly handsome contractor.  When she needs a strong shoulder to cry on, Russ is there for her (and he’s more than just a pair of shoulders!).

Everybody at the Boathouse bar is talking about her.  There’s no escape!  Even in the bathroom, she overhears a conversation about herself and, though she doesn’t have the strength to face these rumours head-on, she also doesn’t really have anyone to voice her hurt to… not until she bumps into Russ.

Russ has been half in love with her for years, but Ellora was grieving the death of her husband.  Even if she’s now emotionally ready to succumb to their mutual desire… is she really prepared to share her aging body with a strapping young man like Russ?

EXCERPT:
Even in the low light of the library, Ellora could see the scarlet blush rising up Russ’s neck, ascending all the way to his forehead.

“You’re a very attractive lady,” he said.  “Very attractive.  I wouldn’t be lying if I said you were the most beautiful woman here.  I think your family’s jealous of more than just your money, Mrs. Milton.”

“Ellora,” she insisted, gazing up at him, finding at once softness and sheer lust in his eyes.

“Ellora,” he said, his breath rumbling like a grizzly’s growl.

The heat between them might have singed the eyebrows off a weaker woman, but Ellora wore their shared lust like a jewel.  “You’ve been so kind,” she said.

She didn’t give him time to finish, launching herself at his lips, kissing him hard while his fingers felt their way up her side.  Her dress was a flimsy thing, though heavy with shimmering beads, and his fingertips soon met bare skin, searing it like a hot pan.

“Maybe we shouldn’t,” he whimpered like a loyal mutt.

But Ellora was already reaching around, unfastening her bra before letting the strap of her dress slip down her shoulder, slide down her arm.  “Oh Russ, darling, I rather think we should.”

His hot gaze followed a trail of naked skin left in the wake of her tumbling dress.  When her breasts were bare, he stared at them, transfixed, and that wolfish lust in his eyes gave her cause to grin zealously.  She took hold of his big hand and moved it to her breast, pressing it, making him squeeze.

The heat of his skin against her sensitive nipple ramped up Ellora’s wild desire.  She moaned softly, and he responded in kind, sliding down the couch and landing on the floor in front of her.  Like a desperate beast, Russ pulled her into his grip and sucked her nipple so hard she hissed at the sensation.

“Careful, careful,” she warned, pressing on his forehead, shifting him to the other breast.  “Too much too soon, sweety.”

He looked up at her with worry in his dark eyes.  “I’m sorry, Mrs. Milton. Did I hurt you?”

She smiled, trying not to laugh.  “Will you please call me Ellora?”

For more news about the Wedding Heat series and special offers, keep coming back to https://weddingheat.wordpress.com/

The Countdown is ON!

Wedding Heat: Wife Watching ReleaseJune 21, 2013
Suki is back in the 12th installment of Wedding Heat! In Wife Watching, her husband Simon watches while she seduces a handsome stranger.